Unhallowed Metropolis: The battle for London 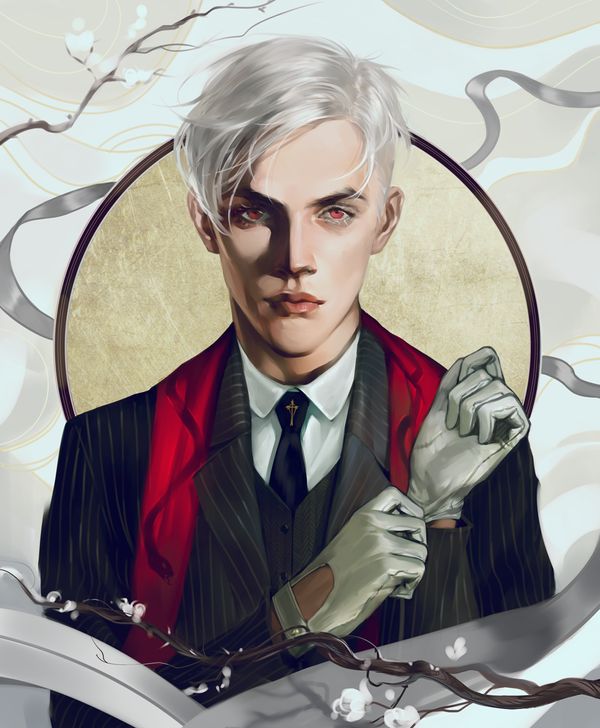 Name: Israel “Whitey” Younger
Date of Birth: 03/02/2081
Calling: Criminal
Titles: N/A
National Origin: Limehouse district, Greater London, England
Close Family:
Father – Rabbi Levi Younger
Mother – Kathleen Ellis, deceased
Half-Siblings (Mother’s side)- Marianne Alcott, Amanda Ellis
Half-Siblings (Father’s side)- Shia Younger
PC Connections: Dr. Caledonia Whitlock, Alexander DeWitt IV
Organizational affiliation(s): Oxford and Bleaker LLC, Various criminal and blackmarket enterprises
Appearance:
Israel Younger is a youthful man, often dressed sharply with a calm, but wolfish wry expression. His hair is a stark white, with gossamer, nearly translucent, milky skin to match; his eyes, a disquieting cold, pale, pink hue. These oddities, all, are hallmarks of the genetic aberration known as albinism, which is known to plague the lower classes of the Metropolis. Standing at 5’6" and just above 8 stone, Israel is small and lithe, cutting an unimpressive figure. Despite, or perhaps because of his unimpressive frame, the young man dresses immaculately: tailored suits, patent leather shoes, white gloves, and often a pair of finely made, ivory framed spectacles.
Backstory:
Known as “Whitey” on the East End streets he grew up on, Israel is highly reticent to talk of his upbringing. He was born within a half submerged Shadwell Rookery, called the Brickhouse, which grew like a cancer out of a collapsed and partially flooded mill building along the Thames. There he lived with his mother and her two elder children, until around the age of 5, when his estranged father paid to move the family to a considerably better, though still poor, Limehouse brownstone which abutted the Stepney wall. Growing up alongside the Chinatown gangs of Limehouse, Israel took to tooling and grifting to supplement his family’s meager income. In his teenage years after his mother’s death to cholera, he became more ambitious, coming to work as a specialist, supplier, and negotiator for many of the various factions vying for underworld primacy in Whitechapel. Though Israel would work for many outfits in the district, he was always cautious to remain an independent operator. Although he has had many close calls, Israel has never been found guilty of a crime, despite being arrested twice, and being a person of interest in dozens of cases. His reputation of outsmarting and outplaying The Metropolitan police is well known in underworld circles, earning him another nickname, the Teflon Kid, after the inability of The Metropolitan police to make any accusations stick. In spite of this reputation Israel has become a party to many a fancy soiree in large part due to the confidence of a certain noteworthy and raucous West End personality, Dame Ruth Bainbridge, herself no stranger to flirtations with the grungier side of Londoner life. For his part, Mr. Younger seems to enjoy his minor infamy, impressing many a hip Soho aristocrat with his wry wit. As for the stodgy blue bloods at such salons, banquets, and carousals who disapprove, their insults and disparagement seem to roll off of his back with as much impact and consequence as the allegations and recriminations of local police.

by: ohyoungmarriner
See All Pages

I'm sorry, but we no longer support this web browser. Please upgrade your browser or install Chrome or Firefox to enjoy the full functionality of this site.